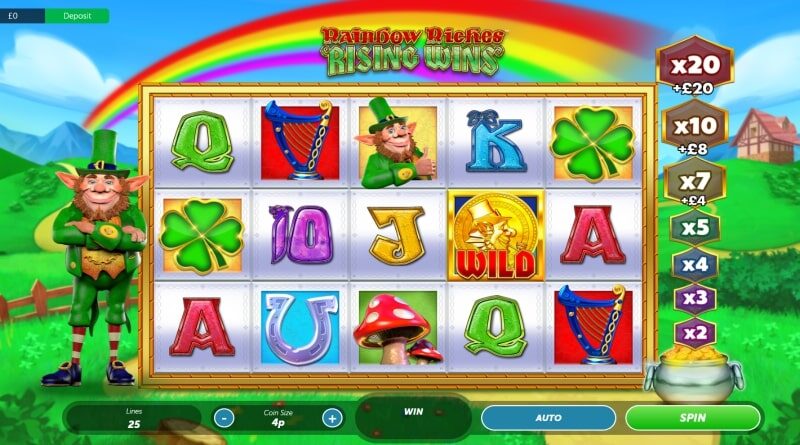 Rainbow Riches  Rising Wins – 5 Reels and 25 winlines of fun with Scatter Symbols and a Wild Symbol. Sounds pretty standard fr an online slot game yeah? But what happens when you also add the Rainbow Meter Multiplier, Bonus Coins , Cascading  Reels and a Return To Player (RTP) of 95.9%? Well, read on to find out…

Yes – Wins collapse and are replaced

Rainbow Riches Rising Wins is one of the newer online slots to be added to the Rainbow Riches stable of games and its…..well, its consistent really. Its a 5 reel slot with three characters per reel and has 25 winlines.

You play it like you do any other slot game – pick the amount that you want to spend per spin. This amount is then divided by the number of winlines to give each line a value. So, if you are playing £1 per spin, then because Rainbow Riches Rising Wins has 25 win lines, each of those lines is worth 4p each. Got that? Good.

The aim of the game is to match reel symbols on cosecutive reels running left to right from Ree 1 to Reel 5. The more reel symbols that you match – the more you win, with 5 or more of the Leprechaun reel symbol landing you a healthy 625 x your bet.

I say 5 or more because the Leprechaun symbol also acts as a Scatter Win, meaning that it pays out if you get 3 or more appearing anywhere on the reels.

Also available to help you is the Rainbow Riches Rising Wins Wild symbol. In this game you’ll recognise it straight away if you’ve ever played a Rainbow Riches game before – and if you haven’t then there a massive clue as to which one it is as it as WILD written on it in massive letters.

Wild symbols substitute for any symbols  in the game meaning that you can get multiple wins in one go.

Unlike most Rainbow Riches games Rising Wins utilises the Cascading Reels method of play. Instead of the reels actually spinning when you press the start button, they symbols drop out of the bottom of the screen to be replaced by 15 more of them. if you get a win, those symbols disappear in puff of smoke and new reel symbols tumble in from above to fill the gaps.

Using this method means that it is possible for plenty of wins per go. 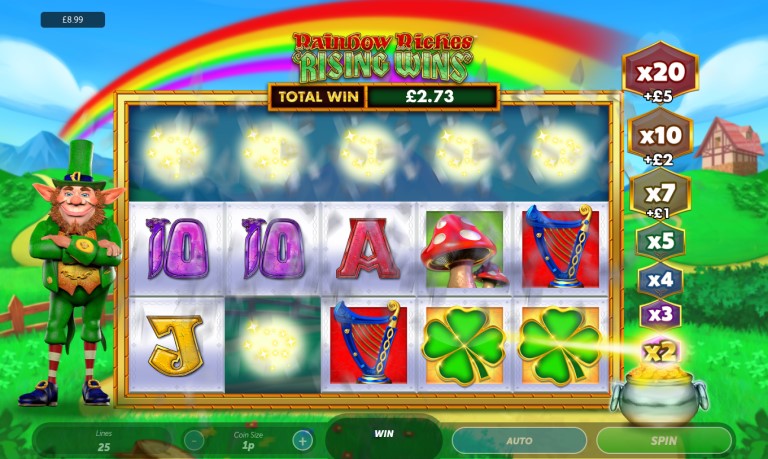 Notice how the winning reel symbols disappear to be replaced by new ones.

Whilst there is no Free Spins feature in Rainbow Riches Rising Wins, there is the Rainbow Meter Multiplier, which is an interesting addition.

Essentially when you get a win, that initial win is paid out as normal. The cascading reels do their thing and then new reel symbols drop into view. If you get a second win, this win is doubled. Again the winning reels vanish and more reel symbols drop in. A win this time is trebled, and so on all the way up to a 20x multiplier. If you get further wins after that they will all be paid out at this 20x level. Once you get to a 7x win multiplier you also win extra cash money too – this amount is totally dependent on your total spin stake.

Its a good little feature and something that’s a little bit different from the normal, which is nice to see – a lot of online slot games are pretty generic in their game play so something a little different is refreshing to these tired old eyes.

Now that you know how to play the Rainbow Riches Rising Wins Online Slot game you might want to try it for yourself. If you do then there are plenty of Online Casinos that have this game in their portfolio.

With all New Player Bonus Offers there will be Terms and Conditions attached. Please make sure that you understand what these are as sometimes there are conditions that you will have to fulfill before you are able to withdraw any winnings.

New Players to Jackpot Joy will get either 30 Free Spins on their Double Bubble online slot or £50 of Free Bingo when you deposit and play a minimum of £10.

New Players have the option of 30 Free Spins on “Paper Wins” or £50 of Free Bingo when you sign up, deposit and play £10. 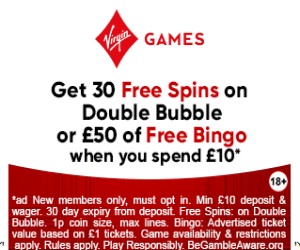 Virgin Games are offering all New Players the choice of 30 Free Spins on their Double Bubble online slot or £50 of Free Bingo when you deposit and wager £10. 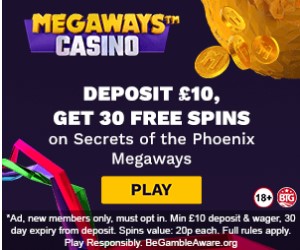 New Players to Megaways Casino will get 30 Free Spins on Secret Of The Phoenix when they deposit and play £10. 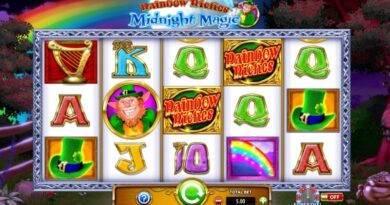 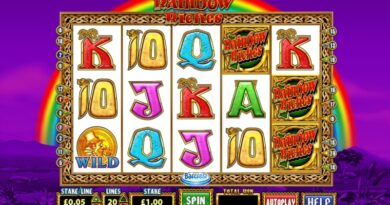 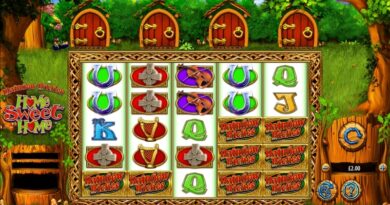